HGH — Natural Production and Synthetic Use 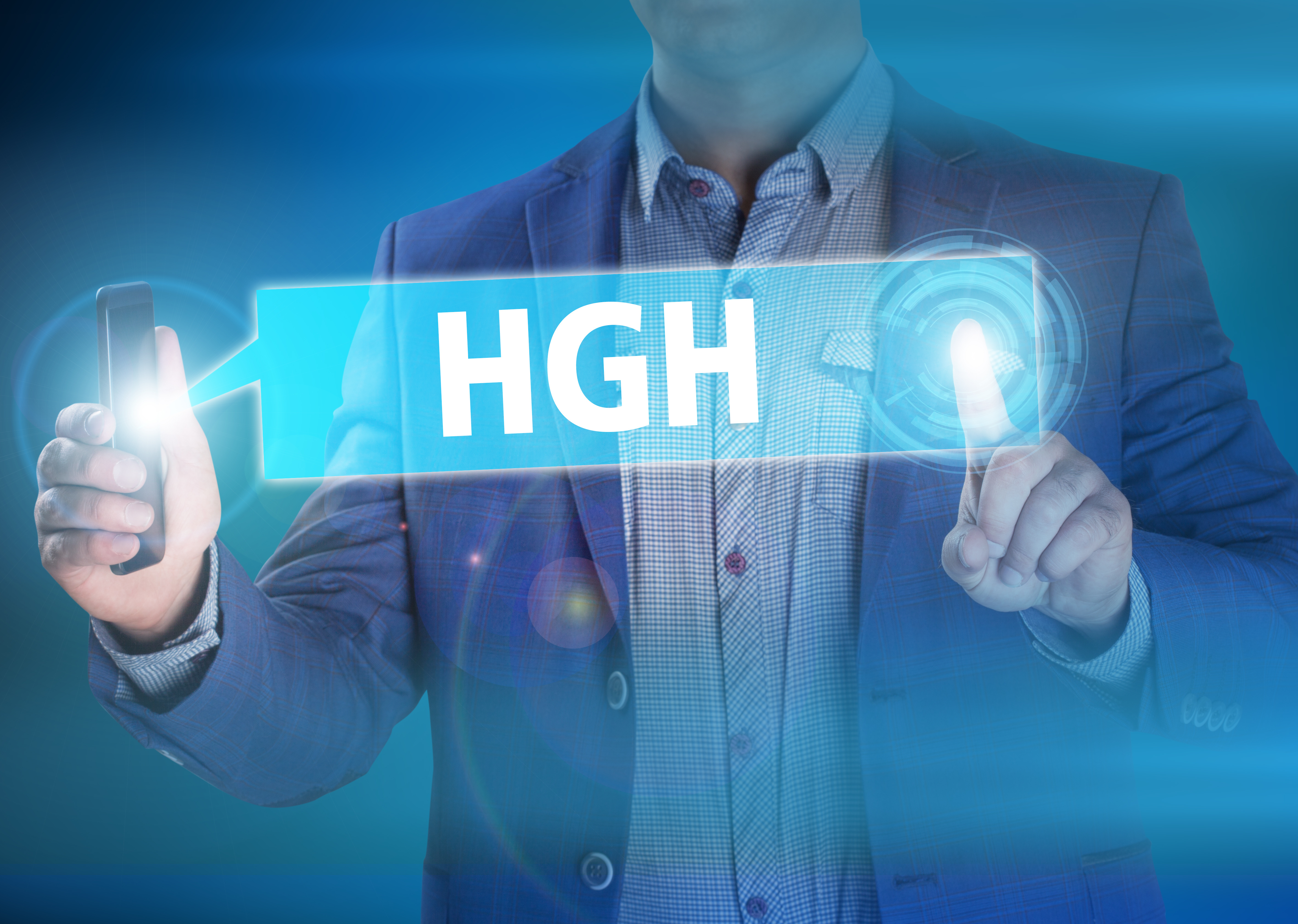 Naturally produced HGH, or human growth hormone is created in the body, and secreted through the pituitary gland throughout childhood and adolescence. The polypeptide stimulates tissue and bone growth when we are young, and increases protein production, fat utilization, and blood sugar levels throughout life.

Several factors influence HGH production in the body including exercise, trauma, and sleep. Normally, greater amounts of HGH are produced at night, with levels tapering off throughout the day. Human growth hormone levels increase throughout childhood and tend to peak at adolescence. As we age however, HGH begins to decline.[6]

Because human growth hormone is an “anabolic hormone” and aids in tissue and organ regeneration, the effects of lower HGH levels may include decreased muscle and bone mass in individuals.[8]

As part of the overall endocrine system, chemical messengers (hormones) regulate many functions throughout the body by “turning on” and “off” particular processes at specific times. The pituitary gland at the base of the brain controls these hormones, and also produces HGH, which stimulates growth in children. Certain conditions such as cleft lip or cleft palate may be caused by a deficiency in this hormone.[5]

Synthetic Growth Hormone — Use and Misuse

With the advent of recombinant DNA technology, synthetic HGH was introduced in 1985 and approved by the FDA for specific uses in both adults and children. As part of Growth Hormone Replacement Therapy, the ‘biosynthetic’, known as somatropin is administered by injection. One of the primary reasons doctors prescribe synthetic growth hormone involves the deficiency of HGH in the body.[1]

The lack of human growth hormone, naturally manufactured by the body presents itself differently depending on age. Adults may suffer anxiety or depression, decreased sexual desire, difficulty with concentration, and loss of muscle mass and fatigue as the result of low HGH. Children may be significantly shorter than their peers and appear younger than their age. Puberty may also be delayed.

Certain medical conditions may be treated with synthetic growth hormone. These include:

Typically, HGH is injected under the skin and may provide:

Human growth hormone may lead to a number of side effects including:

* HGH has been known to contribute to diabetes and heart disease, as well as pre-existing malignant cell growth.[8]

Since its inception, human growth hormone has been at the center of much controversy over abuse by athletes, body builders, and individuals attempting to reverse the effects of aging.

Athletes may abuse HGH along with anabolic steroids in order to improve or enhance athletic performance.[1]

Since the late 1980’s HGH misuse has steadily increased among athletes. Because it is difficult to detect, and without major side effects, the hormone is used to increase muscle mass and power. While widespread abuse of HGH has been documented throughout the nation, the full extent of the problem is still unknown. Based on preliminary findings it is estimated that 5% of U.S. male high school students currently use, or have used human growth hormone as an anabolic substance. Female use of the synthetic agent is seen as well, though it is unknown at this time, how widespread it may be.[7]

According to the American Academy of Addiction Psychiatry, illicit use of HGH has become common among young male weightlifters as well. With 12% admitting to HGH use, young men exhibit patterns of classic substance abuse, along with dependence on anabolic steroids.[3]

In competitive sports, the World Anti-Doping Agency, and the International Olympic Committee prohibit HGH. It is further classified as a performance enhancing substance.

There continues to be much debate over the overall efficacy of HGH and the aging process.

In 18 studies of healthy elderly adults, (Liu and colleagues (2007) HGH was linked to only minor changes in body composition. There were however “increased rates of adverse events.” “Based on this evidence, GH cannot be recommended as an anti-aging therapy.” In fact, lower levels of human growth hormone (found in elderly individuals) may actually prevent certain cancers and other age-related diseases.[2]

While human growth hormone is necessary for proper function in both children and adults, true deficiency must be diagnosed by a physician, through careful stimulation testing of the blood.

There has been some success with natural HGH releasers, designed to stimulate the pituitary gland into production of Human Growth Hormone. Because HGH levels tend to decline as we age, many of us suffer from loss of energy, difficulty concentrating, lower sex drive, fatigue, and weight gain from fat (especially around the midsection).

When the body has been neglected through poor diet and lack of exercise over a period of time, the pituitary gland fails to produce as much HGH as it once did. Since production of the hormone is highest at night and stimulated during sleep, many people fail to get the rest they need to replenish HGH supplies. Through natural supplementation with Human Growth Hormone Releasers, individuals have experienced a boost in energy, better muscle tone, a reduction in fat, and a renewed sense of overall well-being.