Posted by Medical Board on January 22, 2019 in Conditions Hormones Men Women Last updated on February 6, 2020 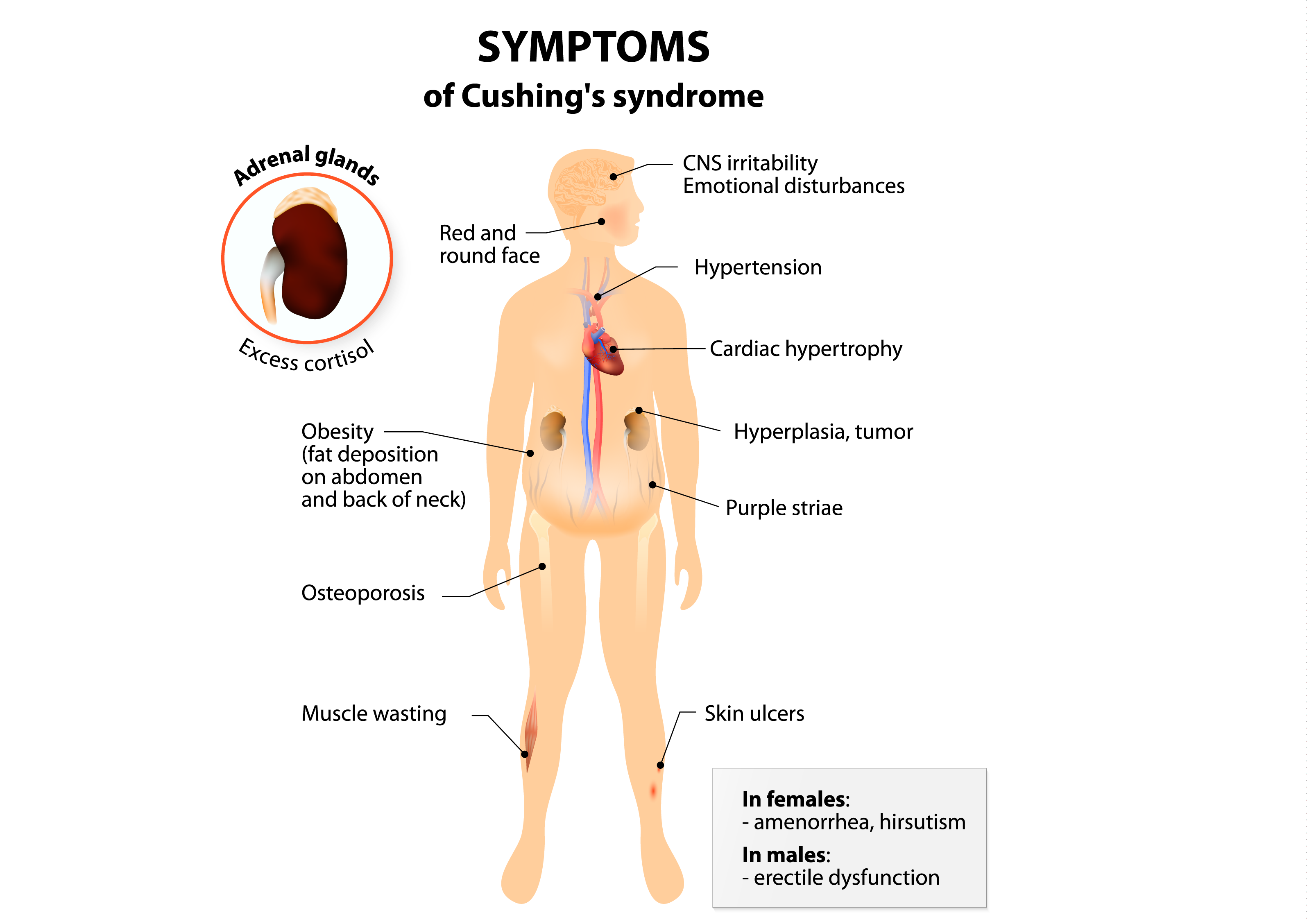 Affecting only about 10 to 15 people per million every year, the rare condition, “Cushing’s Disease” can wreak havoc on the body, causing a multitude of uncomfortable and sometimes debilitating symptoms.[3]  Cushing’s disease is different from Cushing’s syndrome however.

Cushing’s syndrome refers to the diagnosed medical condition of elevated cortisol levels in the body.  This encompasses all causes for the increased values.

In the case of Cushing’s disease however, abnormal cells collect in the pituitary gland and form a tumor.  This tumor releases excessive amounts of ACTH (adrenocorticotropic hormone).  In direct response, the adrenal glands overproduce cortisol.[8]

What are the symptoms of Cushing’s syndrome/disease?

Individuals with Cushing’s syndrome or Cushing’s disease may experience:

Other Cushing’s disease symptoms may include:

Beyond the normal symptoms associated with Cushing’s syndrome, certain complications or other medical conditions may occur as a result.

Some of these include:

What is cortisol and why do we need it?

While excess cortisol in the body is unhealthy, cortisol in and of it self is not bad, in fact it is necessary.  Cortisol is a hormone, referred to as the “stress hormone” because it enables the body to respond appropriately to dangerous situations.  Historically, the hormone was needed to keep individuals safe from physical harm from wild animals and other predators.  Cortisol also helps the body convert food to energy, stabilize blood glucose and blood pressure, and keep inflammation down.

The adrenal glands, located on top of the kidneys produce cortisol.

Who is likely to develop Cushing’s syndrome?

Who gets Cushing’s disease?

Cushing’s disease is a rare disorder, affecting adults between the ages of 20 and 50.  Roughly 70% of the sufferers are women.[3]

Cushing’s disease develops when a pituitary tumor is present and releases excessive amounts of ACTH.  This stimulates the adrenals into overproducing cortisol.[1]

Cushing’s syndrome is much more common than Cushing’s disease and refers to consistently high levels of cortisol found in the body.

Types of Cushing’s syndrome and other causes include:

Types of tumors that can possibly cause Ectopic Cushing syndrome include:

Who takes steroids? —Why Cushing’s syndrome may result

Glucocorticoid steroids are contained in many medications and mimic the natural steroid hormones the body produces.

Many medical conditions require steroid hormones to control inflammation in the body including:

Cushing’s syndrome occurs when the body’s tissues are exposed to high levels of cortisol for too long.

In healthy, normal individuals the hypothalamus, just above the brainstem sends CRH, or corticotrophin-releasing hormone to the pituitary gland located behind the nose.  This triggers the pituitary gland’s hyperproduction of adrenocorticotropic hormone (ACTH) causing the adrenal glands to flood the bloodstream with cortisol.

Cortisol performs many necessary functions for the body and without it we would cease to function correctly.  Cortisol is necessary to help the body keep blood pressure level, and helps maintain cardiovascular function.  Cortisol also helps the body control the immune system and its inflammatory response and works to balance insulin in the body, needed for metabolic processes.[7]

While glucocorticoid-steroid use is the most common reason for Cushing’s syndrome, higher than normal cortisol levels are also common among some individuals.  Cortisol levels may be high if you have depressive disorders, anorexia, or high estrogen levels.[3]

How do doctors diagnose Cushing’s syndrome?

Cushing’s syndrome can be mistaken for other medical issues so thorough examinations and testing are needed to rule out some conditions.  Medications taken for inflammation (glucocorticoids) can also cause cortisol levels to soar.

Once this is done a diagnosis is made by:

A diagnosis of “Cushing’s disease” refers solely to the state of elevated cortisol due to a tumor on the pituitary gland, where the hormone ACTH is produced and released.

Cushing’s disease may be difficult to identify in some cases and should be diagnosed or confirmed by an endocrinologist.

Once Cushing’s syndrome is confirmed, a doctor who suspects Cushing’s disease will run some or all of the following tests:

Treatment for Cushing’s syndrome is dependent on the cause of increased cortisol levels.

If this is due to corticoid-steroid medications, doctors may be able to reduce the dosage and manage an existing medical condition in other ways.  Causes involving the presence of tumors may be treated with surgery (or treatment to shrink the tumor).

Whether you have some or all of the symptoms associated with Cushing’s syndrome or disease, it is critical to get a definitive diagnosis from an experienced physician who works with endocrine disorders.  Based on your complete medical history and the reason for a Cushing’s finding, you can proceed with the best treatment option(s) available for your particular circumstances.

5“Cushing’s Syndrome.” National Institute of Diabetes and Digestive and Kidney Diseases, U.S. Department of Health and Human Services, 1 May 2018, www.niddk.nih.gov/health-information/endocrine-diseases/cushings-syndrome.